Our team of elite trainers from Riverdale headed for Belize before the break of dawn on Sunday, July 15, 2018. The Belize Team consisting of Hilary Linton, Lead Trainer, Helen Lightstone and Regina Thompson checked in at Pearson International with a heavy load of training materials. We were soon off to Miami International where the fourth member of our team, Lisa LaBorde, joined us after visiting with family in the U.S.A.

With our team complete, we embarked on the second leg of our journey and what was a second foray into Belize City, Belize for Hilary and Regina. We stayed at the Best Western Biltmore Hotel (the Biltmore) which also served as the training venue. The Biltmore has a beautiful courtyard with verdant gardens and clean rooms. Some of the staff recognized us from our last visit in 2016.

Our trainee group consisted of 35 Senior Police Officers from diverse regions of Belize and included 2 Superintendents.

Our pre-departure preparation included brushing up on our knowledge of the socio-cultural and economic context of Belizean society. We also refreshed our knowledge about issues of gender equality, women’s empowerment and the politics of Belize. This served us well as it made our presentations, role-plays and discussions pertinent and relatable.

We approached Day One with anticipation. After all, we were meeting a group of strangers who had great expectations of us. The theme was on Conflict and Negotiation. We sought information about issues the Officers dealt with in their daily interactions with their various communities. We discovered that some of them are assigned to the Gangs, Drugs, Guns and Major Crime Units for which aspects of mediation are used to de-escalate potential violent conflict. It was a daunting challenge to think that mediation can be used in such situations, but we understood better when the Officers explained that Belize is a small country and in many cases the young people engaged in violence know each other and know the officers— creating fertile ground for the potential of dispute resolution. Thanks to team member Lisa, we also learned that the idea of using mediation in such high-risk contexts has been used by community workers in Chicago.

By mid-day, Day One, we had a sense of the personalities of some individuals in the group – important learning for the success of the days that followed. A number of Officers informed our team that they had already been using mediation techniques in their work and were pleased to learn structure and terminology that they found relevant to their practice.

At the end of Day One we were discussing re-arranging seating. Participants were naturally drawn to sitting with their friends and acquaintances and this was distractive at times. We rearranged seating for Day Two, but learned we would have to better explain our intentions in future actions — as the next morning our participants reverted to their original seating plan with the explanation that they thought the cleaning staff made the changes in seating!

By Day Three, our confidence in the teaching and learning strategies for this group of diverse learners was solid. It was like learning to dance the Waltz to the beat of Salsa as the situation demanded. Even though transitioning from binary cultural traditions seems like a slow process, it was gratifying to learn that unlike other jurisdictions in the world today, gender diversity is not a taboo subject in Belize.

Role-Play seemed to be the highlight of the learning process for a large number of Officers. Some of those who loved it were eager to volunteer as actors at every opportunity… and those who volunteered to mediate were very good in the role. By the end of the week, each Officer had mediated at least one dispute with coaching from one of our team and, often, excellent coaching from their colleagues as well! The progress we observed was exceptional and rewarding.

Closing statements from the trainees were positive – all ready to practice mediation as a de-escalation tool and some with plans to set up mediation services when they retire. For us as trainers, there was nothing more satisfying than to know that there are others who want to follow in our footsteps and become members of the global peacemaking club.

Spending five days with the police officers and seven days with colleagues created a unique and moving experience. We observed the Officers as they interacted with each other, their interaction was typically with great affection and joviality but took their role as students seriously.  As a team, we moved with fluidity, assisting each other in anyway necessary to support the Police Officers learning experience. 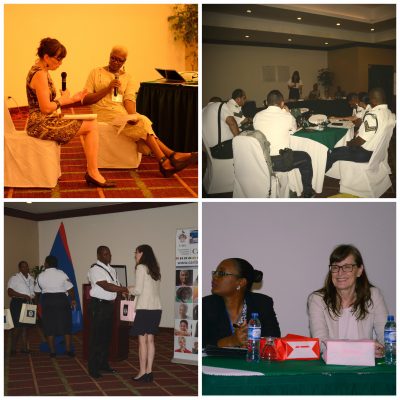 Our evening debriefs were a positive way to ensure the next day would move forward with the same successful fluidity. However, as the days passed and Friday came, a somberness set upon us as this unique experience would be drawing to a close. We were happy that we had imparted valuable information to the new graduates.

The closing ceremony was formal and beautiful. The new mediation graduates sang the Belize National Anthem. Several times during the closing prayer, the officers were referred to as the new ‘Police Mediators’ which seemed to appeal to them and sent a surge of pride through us as trainers.

There were gifts for us (presented to us individually by students who had kind words and individual messages) and for the Impact Justice staff; photo sessions with generous hugs, cheek kissing and exchanges of email addresses and business cards with promises to keep in touch.

While teaching was our main focus, we squeezed time out of our busy schedule to go on a tour of Belize City. We connected with Daniel, the Taxi Driver who served us on our 2016 training week in Belize.The Impact Justice crew accompanied us on the tour and we had dinner in a quaint restaurant that served local fare, Nerie’s.

A change in the flight schedule on the appointed day of departure foiled our plans. We decided after much deliberation to spend the day in Belize rather than in Miami where we could only hope to find a connecting flight home. Hilary and Helen used the delay to cave-tube outside the remarkable caves 45 minutes outside of Belize City. Tethered to each other and the guide, Hilary and Helen floated underneath the limestone, learned about the history of the jungle, looked at the imaginary shapes created by the limestone and watched the light of the entrance fade further and further away. It would be at least 15 minutes before they saw light from a waterfall. With flashlights on their hard-hats, they looked up and saw hundreds of circular bat caves, thankfully resting peacefully as Hilary and Helen floated underneath them. It would be another 15 minutes before the light from the exit started to become larger and brighter and only a few minutes away from where they began their experience. 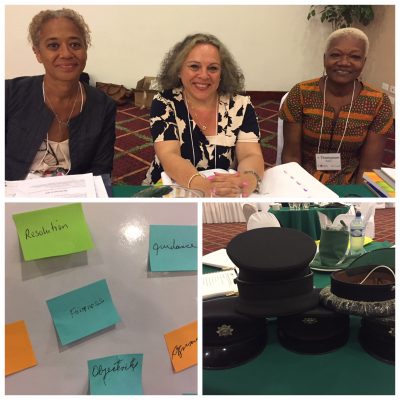 We concluded the week with dinner at an authentic Garifuna Restaurant which offered a single choice on the menu, Fufu (pounded plantain textured like bread dough) with a special kind of soup. It was delicious.

Leaving beautiful, bucolic Belize was with a measure of sadness but there is always the opportunity to return as tourists.

Our thanks to the wonderful team at IMPACT Justice, including Professor Velma Newton, David Gittens, Ms. Alicia Nicholls and all Impact Justice staff that made this training a success.

Hilary Linton is a Toronto lawyer, mediator, arbitrator and teacher. After litigating family and civil disputes for 14 years, she started Riverdale Mediation which is internationally recognized for high quality dispute resolution services and innovative ADR training. Teaching hundreds of adults every year, Hilary and her team at Riverdale have designed a wide range of courses. Hilary has been honoured with the inaugural James G. McLeod Professorship in Family Law at Western University Law School, and the Ontario Bar Association Award of Excellence in ADR in 2014. She has taught many ADR courses as an adjunct professor at Osgoode Hall Law School, Western Law and Toronto Advanced Professional Education.
View all posts by Hilary Linton →

Have you read “Cliff’s Notes”? Cliff Nelson has been contributing monthly pieces to the FDRIO Newsletter, providing commentary on developments in law relevant to FDR. Read some highlights in our latest newsletter: http://ow.ly/zYOS50xUtRW

Access to internships for our Family #Mediation grads has never been better! Read about YorkU School of Continuing Studies' partnership with @RiverdaleADR http://ed.gr/b4owr Explore the Certificate: http://ed.gr/b4ows #Continuingeducation #mediatorintraining

We had two participants from Halifax join us remotely during the first day of our Screening training. They were able to participate in the live lecture, and interact with their fellow peers. For more “Training Snapshots”, check out our latest newsletter: http://ow.ly/BAKP50xUtlR

“Intensive and a lot of material covered, but an excellent refresher”. For more client #testimonials on our Family Law course, view our current #newsletter: http://ow.ly/gLGW50xUnbf #familylawtraining

For a complete list of our upcoming courses in family mediation, family arbitration and parenting coordination for certification, check out our recent newsletter: http://ow.ly/9FpU50xUod7