Posted on September 30, 2022 by Frank Guerreiro

By Hilary Linton and Borzou Tabrizi.

With court delays limiting options for parents who have child-related disputes, parenting co-ordination is increasingly an appealing alternative.

This series summarizes the latest case law about this evolving practice.

What is parenting co-ordination?

PC is private, voluntary case-management that helps parents resolve disagreements about the interpretation or implementation of their parenting plan. A court order, arbitration award or separation agreement addressing decision-making and parenting time is a prerequisite. 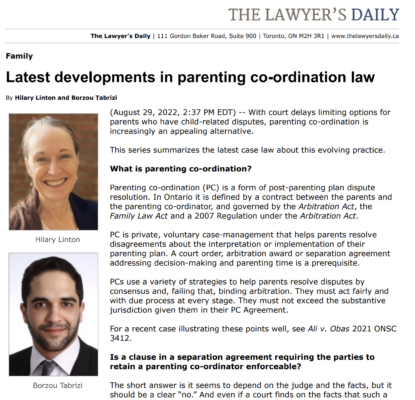 PCs use a variety of strategies to help parents resolve disputes by consensus and, failing that, binding arbitration. They must act fairly and with due process at every stage. They must not exceed the substantive jurisdiction given them in their PC Agreement.

Is a clause in a separation agreement requiring the parties to retain a parenting co-ordinator enforceable?

The short answer is it seems to depend on the judge and the facts, but it should be a clear “no.” And even if a court finds on the facts that such a clause is binding on the parties, any resulting awards are not.

These prerequisites are not mere formalities as some courts have characterized them. Among other things, they require arbitrators to provide a specified form of screening for power imbalances and family violence before the parties commit to the process. And they require arbitrators to certify that they will continuously reassess those dynamics if they conduct any arbitrations.

If the prerequisites are not met, the Arbitration Act and Family Law Act together state, definitively, that the agreement is not a “family arbitration agreement” and the awards resulting from that process will not be enforceable by a court.

Therefore, an agreement to retain a parenting co-ordinator set out in a separation agreement will not produce enforceable awards, even where the parties and arbitrator have subsequently acted on that agreement, unless they have executed an arbitration agreement that complies with the Regulation.

This makes sense. If the parents have not been screened for power imbalances and family violence in the manner stipulated by the Regulation, it is not appropriate for a court to subsequently compel them to participate in that process or be bound by its outcome, regardless of their actions.

The costs of a failure to meet the statutory and regulatory requirements should not be borne by the parties.

It is understandable that courts might want to hold parties to their apparent commitments and to avoid the resulting unfairness where a parenting co-ordinator or arbitrator has not required them to comply with the prerequisites. But the legislation and Regulation are clear. Further, family arbitrators are required by the Regulation to take specified training to learn these requirements and to certify that they have been followed.

The fallout from an arbitrator’s failure to do so was keenly illustrated in a 2022 decision, Shinder v. Shinder 2022 ONSC 181. In that case, the parties’ separation agreement anticipated future mediation-arbitration of designated disputes. A dispute arose, and a mediator-arbitrator was confirmed via correspondence between counsel. But no arbitration agreement was signed and there was no screening for power imbalances and family violence.

The parties attended a mediation at which they agreed to appoint the same arbitrator to summarily arbitrate future disputes arising from that settlement. Again, no arbitration agreement was executed and there was no screening for family violence and power imbalances.

Notwithstanding, the court considered the language of the statutes and Regulation and determined that, by their actions, the parties and the arbitrator had entered into a binding arbitration agreement.

This outcome is problematic as it fails to acknowledge the important reasons for the mandatory procedural requirements. And it leaves the parents with an order binding them to a process that leads to unenforceable awards.

A better approach is for courts to require family arbitrators to comply with their responsibility under the Regulation to ensure their clients execute family arbitration agreements that include the required terms, with independent legal advice, and to be satisfied that all mandatory prerequisites have been met before they do so.

Part One was originally published by The Lawyer’s Daily on August 29, 2022 .

In part two, we provide more of the latest case law about the evolving practice of parenting co-ordination.

What are the key steps to retaining a parenting co-ordinator?

Parents should each have a confidential intake meeting with the proposed parenting co-ordinator before making a commitment. During this meeting they are each screened for any power imbalances that might impact their suitability for private adjudication.

This can include their ability to fund or manage the commitments of the process; their capacity to fully and safely participate without fear of retaliation; mental illness or trauma that could impact their procedural needs; any risk of harm to children as a result of a parent’s participation; the likelihood that remedies unavailable to a private adjudicator might be needed; their respective readiness and governability; and so on.

Once the PC agreement is finalized, either parent may seek the assistance of the parenting co- ordinator to resolve disputes in the manner prescribed by their PC agreement during its term.

Is the PC process confidential?

That depends on the type of process provided for in the PC agreement.

In Ontario there is no parenting co-ordination legislation or court directive governing the practice. It is a voluntary process governed by private contract, the Arbitration Act, the Family Law Act and Reg. 134/07.

communications are confidential and without prejudice, subject to being relevant on an appeal or motion to set an award aside.

In the recent case of Zyrmiak v. McNamee 2020 ONSC 5850, involving a closed PC agreement, the court did not permit a parent to refer to discussions from the PC process in their affidavit, citing settlement privilege. In Jirova v. Benincasa 2018 ONSC 534, the court dealt with a PC agreement that, except for the screening process, was open and therefore not protected by settlement privilege. In Joachim v. Joachim 2021 ONSC 8584, a 2021 decision, the court permitted a parent to call the parenting co-ordinator as a witness pursuant to the terms of an open PC agreement.

In a 2022 decision R.L. v. M.F. 2022 ONSC 789, the court declined to grant a parent’s request to have counsel appointed for the children. The court noted that, in addition to other interventions that effectively achieved the desired goal, a parenting co-ordinator had reported to the court on her findings.

Counsel advising their clients on PC agreements will want to consider carefully which process best meets the needs of their clients.

Is a PC always appropriate in high-conflict cases?

Counsel and parties will sometimes agree to a parenting co-ordinator in the highest conflict matters as a means of supporting shared decision-making. Although the process can be a better alternative to court in many cases, sharing parental decision-making with reliance on a parenting co-ordinator to broker differences will not always be the best option for the children.

In its 2021 decision A.R.N. v. M.A.P. 2021 ONSC 7676, the court declined to award shared decision- making with a parenting co-ordinator to manage disputes. Noting the strong lack of trust between the parents, the court found that:

The conflict and lack of cooperation and coordination are so pervasive that, if there were joint decision-making, every single decision, no matter how small, would likely be referred to the parenting coordinator and, pending a resolution, the children would be in limbo.

In the 2021 decision A.P. v. P.P. 2021 ONSC 7424, Justice David Price held that declining to consent to parenting co-ordination was not unreasonable behaviour justifying a costs sanction given that private dispute resolution is voluntary in family law matters and is not always appropriate.

Can a PC be ordered by the court?

Courts in Ontario do not have jurisdiction to order any voluntary dispute resolution process, including parenting co-ordination, without the consent of the parties. This was confirmed in the recent decision of Sue-A-Quan v. Duarte 2022 ONSC 1859. However, there are other recent decisions where a parenting co-ordinator has been ordered by the court: see the 2021 decisions in A.E. v. A.B. 2021 ONSC 7302 and Altman v. Altman 2021 ONSC 6610.

In summary, the case law, though not always consistent, is helping parenting co-ordinators and counsel better tailor this process to meet the needs of parents in conflict. For additional guidance, an Ontario organization, the Family Dispute Resolution Institute of Ontario, offers guidelines for the practice and a roster of certified parenting co-ordinators.

Part two was originally published on August 31, 2022 by The Lawyers Daily.